The White House condemned Donald Trump Saturday after the former president met at his Florida estate with a renowned Holocaust revisionist and with rapper Kanye West, who is embroiled in a storm over antisemitic remarks.

Trump acknowledged having dinner with West, who now is known as Ye, on Tuesday night at Mar-a-Lago and said he brought along friends, one of whom was Nick Fuentes, an outspoken antisemite and racist.

White House deputy press secretary Andrews Bates condemned Trump’s meeting with Fuentes, who is characterized as a white supremacist by the US Justice Department.

“Bigotry, hate, and antisemitism have absolutely no place in America — including at Mar-a-Lago. Holocaust denial is repugnant and dangerous, and it must be forcefully condemned,” Bates said in a statement.

US President Joe Biden, who is spending the holiday weekend in Nantucket, ducked a question about Trump’s dinner. “You don’t wanna hear what I think,” he said. 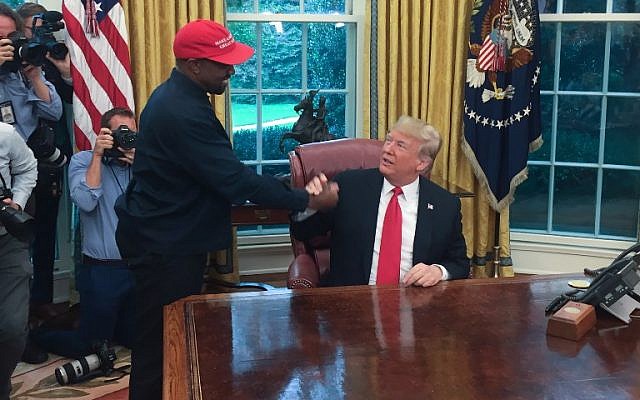 Fuentes has questioned the number of Jews killed in the Holocaust and asserts that Israel has a malicious influence on US policy. His YouTube channel was permanently suspended in early 2020 for violating the platform’s hate speech policy. He attended the racist Unite the Right rally in Charlottesville in 2017 and the Stop the Steal rally on January 6 that led to an insurrection at the Capitol.

Fuentes said after the trip that, while he couldn’t rule out that Trump had heard of him, “I don’t think he knew that I was me at the dinner.”

“I didn’t mean for my statements and my whole background to sort of become a public relations problem for the president,” he added on his show.

Still, he indicated that he preferred Florida Governor Ron DeSantis to lead the Republican party ticket in 2024.

“This is a f**king nightmare,” an anonymous longtime Trump adviser told NBC News. “If people are looking at DeSantis to run against Trump, here’s another reason why.”

White nationalist Christian fascist Nick Fuentes went on a rant against “world Jewry,” calling Jews a “hostile tribal elite” who worship the Devil and have established an “anti-Christ” nation in Israel: “Who else would be leading the insurrection against the true kingdom?” pic.twitter.com/i4mP7lI4jj

Trump announced his plans in mid-November to seek reelection in 2024, and his meeting with a white nationalist unsettled some of his one-time administration officials.

David Friedman, who was Trump’s former ambassador to Israel, blasted the dinner at Mar-a-Lago.

“Even a social visit from an antisemite like Kanye West and human scum like Nick Fuentes is unacceptable,” Friedman said in one of several tweets.

The Axios news site cited a source familiar with the dinner who said Trump “seemed very taken” with Fuentes even though he didn’t seem to know anything about his background. West said after the meeting that Trump was “really impressed” by Fuentes.

West has lost major brand partnerships with the German sportswear company Adidas and US retailer Gap over recent antisemitic statements and associations with extremists.

Trump, in a series of statements Friday, said he had “never met and knew nothing about” Fuentes before he arrived with West at his club. But Trump also did not acknowledge Fuentes’ long history of racist and antisemitic remarks, nor did he denounce either man’s defamatory statements.

Trump wrote of West on his social media platform that “we got along great, he expressed no anti-Semitism, & I appreciated all of the nice things he said about me on ‘Tucker Carlson.’” He added, “Why wouldn’t I agree to meet?”

The former president has a long history of failing to unequivocally condemn hate speech. During his 2016 campaign, Trump waffled when asked to denounce the KKK after he was endorsed by the group’s former leader, saying in a televised interview that he didn’t “know anything about David Duke.”

In 2017, in the aftermath of the deadly white supremacist protests in Charlottesville, Virginia, Trump was widely criticized for saying there was “blame on both sides” for the violence. And his rallies frequently feature inflammatory rhetoric from figures like Republican Rep. Marjorie Taylor Greene, who spoke earlier this year at a far-right conference organized by Fuentes.

Condemnations of Trump were still pouring in on Saturday, albeit less so from mainstream lawmakers in the Republican party.

Outgoing Republican Rep. Adam Kinzinger, who voted to impeach Trump, blasted the former president for “hanging with the David Duke of weak soft boys of today.”

Fellow Republican Rep. Liz Cheney, who is losing her seat after speaking out against Trump, tweeted, “First [Greene] and now [Trump] hanging around with this anti-Semitic, pro-Putin, white supremacist. This isn’t complicated. It’s indefensible.”

Former New Jersey Governor Chris Christie, who has been highly critical of Trump since he lost the 2020 election, said the meeting with Fuentes was “another example of an awful lack of judgment from Donald Trump, which, combined with his past poor judgments, make him an untenable general election candidate for the Republican Party in 2024.”

Trump’s secretary of state Mike Pompeo, a potential 2024 rival denounced antisemitism, without directly referencing the dinner or the president. “Antisemitism is a cancer,” Pompeo wrote. “We stand with the Jewish people in the fight against the world’s oldest bigotry.”

I joined The Times of Israel after many years covering US and Israeli politics for Hebrew news outlets.

I believe responsible coverage of Israeli politicians means presenting a 360 degree view of their words and deeds – not only conveying what occurs, but also what that means in the broader context of Israeli society and the region.

That’s hard to do because you can rarely take politicians at face value – you must go the extra mile to present full context and try to overcome your own biases.

I’m proud of our work that tells the story of Israeli politics straight and comprehensively. I believe Israel is stronger and more democratic when professional journalists do that tough job well.

Your support for our work by joining The Times of Israel Community helps ensure we can continue to do so.

Already a member? Sign in to stop seeing this

We’re really pleased that you’ve read X Times of Israel articles in the past month.

That’s why we started the Times of Israel ten years ago – to provide discerning readers like you with must-read coverage of Israel and the Jewish world.

So now we have a request. Unlike other news outlets, we haven’t put up a paywall. But as the journalism we do is costly, we invite readers for whom The Times of Israel has become important to help support our work by joining The Times of Israel Community.

For as little as $6 a month you can help support our quality journalism while enjoying The Times of Israel AD-FREE, as well as accessing exclusive content available only to Times of Israel Community members.

Thank you,
David Horovitz, Founding Editor of The Times of Israel

Already a member? Sign in to stop seeing this