PINE ISLAND, Fla. – It’s been a week since Hurricane Ian made landfall, and some residents on Pine Island could only reach the mainland by boat – until now.

A temporary bridge has been constructed, and the public can begin using it Wednesday afternoon, explained Gov. Ron DeSantis during a press conference in Matlacha. Many of Pine Island’s residents stayed put for days without electricity and other resources while hoping the lone bridge to the mainland is repaired. 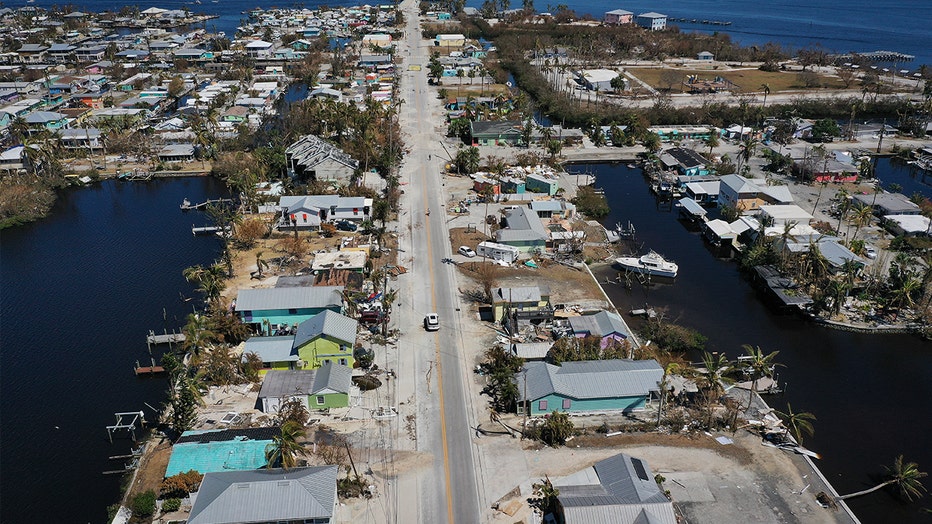 “I saw people who were incredibly resilient. They were boating in things. There was no way they were going to leave this island. This is their home,” he said. “Now with this bridge, we can get some power trucks here.”

“Go easy on this thing,” he added later, emphasizing it is not a permanent solution. “This is not 60 mph.”

Florida officials said the goal was to complete the bridge by the end of the week, meaning they are ahead of schedule. ST JAMES CITY, FL – OCTOBER 2: The bridge over to Pine Island was buckled by Hurriance Ian, where homes were pummeled and flooded from the storm surge when it made land fall, on Sunday, October 2, 2022.

“They were talking about running ferries and stuff,” DeSantis said. “And honestly, you may be able to do that, but I think this is an easier thing, and I think people need their vehicles anyways.”

“We feel as a community that if we leave the island — abandon it — nobody is going to take care of that problem of fixing our road in and out,” Pine Island resident Leslie Arias said as small motor boats delivered water and other necessities.

Wednesday, before the temporary bridge was in place, Publix sent its employees by boat to their single location on Pine Island. Now, they can send trucks over to begin reopening the store.

The Seminole Gulf Railway is known for its dinner theatre train, but the loss of its freight line is a critical loss for the Fort Myers and Naples areas where thousands of homes are damaged and in dire need of materials that are hauled by the railway.

To reach Pine Island, drivers must travel through Matlacha, a colorful fishing village, which was also devastated by the storm.

The owners of Blue Dog Bar & Grill on Pine Island Road said that while their building is still standing, “the damage is massive.”

“It was like a giant saltwater washing machine on spin cycle for six hours inside our restaurant,” according to the restaurant’s Facebook page. “Every piece of equipment is destroyed. Our big shipping container walk-in cooler is in the middle of Pine Island Road and our small walk-in cooler outside is just gone, this storm was ferocious.”

“Exhausted but can’t sleep, today we went out and did some clean up trying to come up with a plan it’s very overwhelming. Right now we will rent a storage unit and move all contents that are salvageable to the unit waiting on the landlords Insurance company to see & inspect and from there we will make decisions.”

Officials are also planning a similar temporary bridge for Sanibel Island, but it will take a little more time. The causeway sustained major damages during the storm, making the only link between Sanibel, Captiva, and the mainland impassable.

The governor’s office said the contract for the bridge repair was awarded Tuesday, and they are anticipating the Sanibel Causeway to be accessible by the end of October.

Once immediate recovery efforts have subsided, the governor said permanent long-term repairs will be made to the Sanibel Causeway. The emergency repairs currently being done will allow the bridge to be safely passable for immediate access and be incorporated into long-term repair plans

President Joe Biden is scheduled Wednesday to visit Fort Myers’ Fisherman’s Wharf in an area that was especially devastated by winds and surging tides.

The Associated Press contributed to this report